Looks like no one wanted to enter last week's character casting contest, so we're offering the same prize for this week's contest. See below for contest details. Remember, to enter, you must comment with your pick of actor/actress, with a brief explanation of why you think they'd fit the role. Bonus for this week, share what you'd think the dragons look like for a chance to win as well!

This week, I'd like to introduce two of the dragons!

Kern Nurrim is the oldest of all the dragons. He is also the head of the Dragon Council, the highest governing body of the dragons.

When in dragon form, Kern resembles the classic Western Style dragons of our world, with white scales. White symbolizes not only his age, but is associated with light, the sun, air, holiness, perfection, innocence, and purity.  He is also sometimes called, "One who creates".
When in "mortal form", Kern resembles an old man with white hair and a long beard. He typically wears Eastern style clothing in the form of a formal robe of white and silver.

Kern possesses several abilities, including the ability to manipulate matter, use Soul Sight, telepathy, and can transform his shape into anything he likes.

Callum's appearance is similar to his brother, Tyler  His appearance, however, is different in that he has darker hair (think medium brown) and slightly taller (closer to six foot odd). He also tends to not show up often, only when he wants to make a point or bring bad news. Also, his eyes are a soft green in color. He's well built, but not overly muscled.

Not much is known about Callum, other then that he tends to be a bit of a prig, very stickler for rules, and has no problem letting other people know when they've done something they shouldn't.

Tyler's older brother (sort of), Callum has no problem lording over the younger boy. He considers himself very wise and powerful. He also does not like mortals at all. He thinks they are petty and dangerous.

So, who do you think might fit these roles? Enter for your chance to win an ebook copy of Tarragon: Key Keeper! 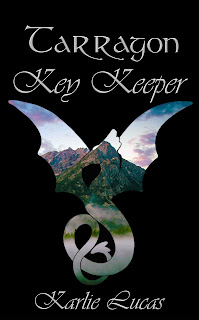