I know I'm a day late posting this but I would like to give thanks to all of my readers and supporters. Without you, I wouldn't be where I am today.

This includes my "writing buddy", aka the cat (Kally). She has no problem "helping" me out with my writing stuff, even when I don't want her to help me. But she's cute so I try not to mind too much. 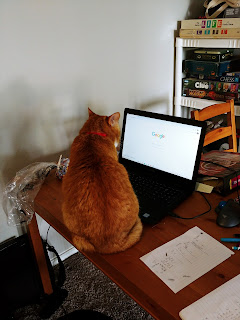 Once more, it's been a hot minute since I last posted anything. I admit to feeling a bit lazy on that end, even though I have been busy with all of my various projects, some in better shape than others. And I can't believe I'm contemplating taking on more.... I must be crazy.

There are a lot of things in the works, and I've already shared some of them with you in my previous post. But, in case you forgot, here's the basic goals for next year. Here's hoping I can get them all done.

And, with that, I hope you all had a great weekend, a fantastic Thanksgiving, if you celebrated that, and hope your December is amazing.

Posted by Karlie Lucas at 12:50 PM No comments: