Kas: A look at the rough draft

This past week has been a fun week of reviews, snippets, and other information about my book during the blog tour for Kas, hosted by the lovely ladies at Loving The Book. To you ladies, I say thank you!


For those who have not yet had an opportunity to check out my new book, remember, you can read the first two chapters right here on my blog for free by clicking here!

There are many out there who are interested in the evolution of stories. And most stories have evolved from something else, even if just from a rough draft. The process is  unique to the writer and the story.


When I first started to write Kas, I was still in junior high, bored out of my mind at a church gathering for Halloween, if I remember correctly. And since Beauty and The Beast has always been one of my favorite fairy tales, I decided to give it a go, with a somewhat modern twist. Obviously, the story has evolved a lot since then. The original draft was not quite 15,000 words long. The end result is about 57,000, a vast difference.


But, for those who like to see the origins of the story, who like that little "extra" put in there, I'm going to give you the opportunity to read the original rough draft.

Please note that should you chose to click the link to this draft, it is far from polished. I injected some of my own awkwardness and struggle to fit in as a young teenager. This is the original draft I wrote all those years ago. Obviously my writing has come a long way since then.

Ready to read? Then click right here. Oh, and feel free to add your comments about things you liked, didn't like, etc. I'm always curious to know those kinds of things.

Posted by Karlie Lucas at 7:43 AM No comments:

Greetings all!  I hope you are as excited as I am about the official release of my newest book, Kas!

For those who have not yet read this novel, maybe because you haven't gotten your copy yet, or you haven't ordered it yet, I'd like to offer a little treat. I'm going to post the first two chapters for you to read. But it won't be on this page, because I want to make you work for it a little bit. All you have to do is click the link below and you will be taken to a page on my site where you can read it at your own pace. No need for an account. Just read it, and let me know what you think. 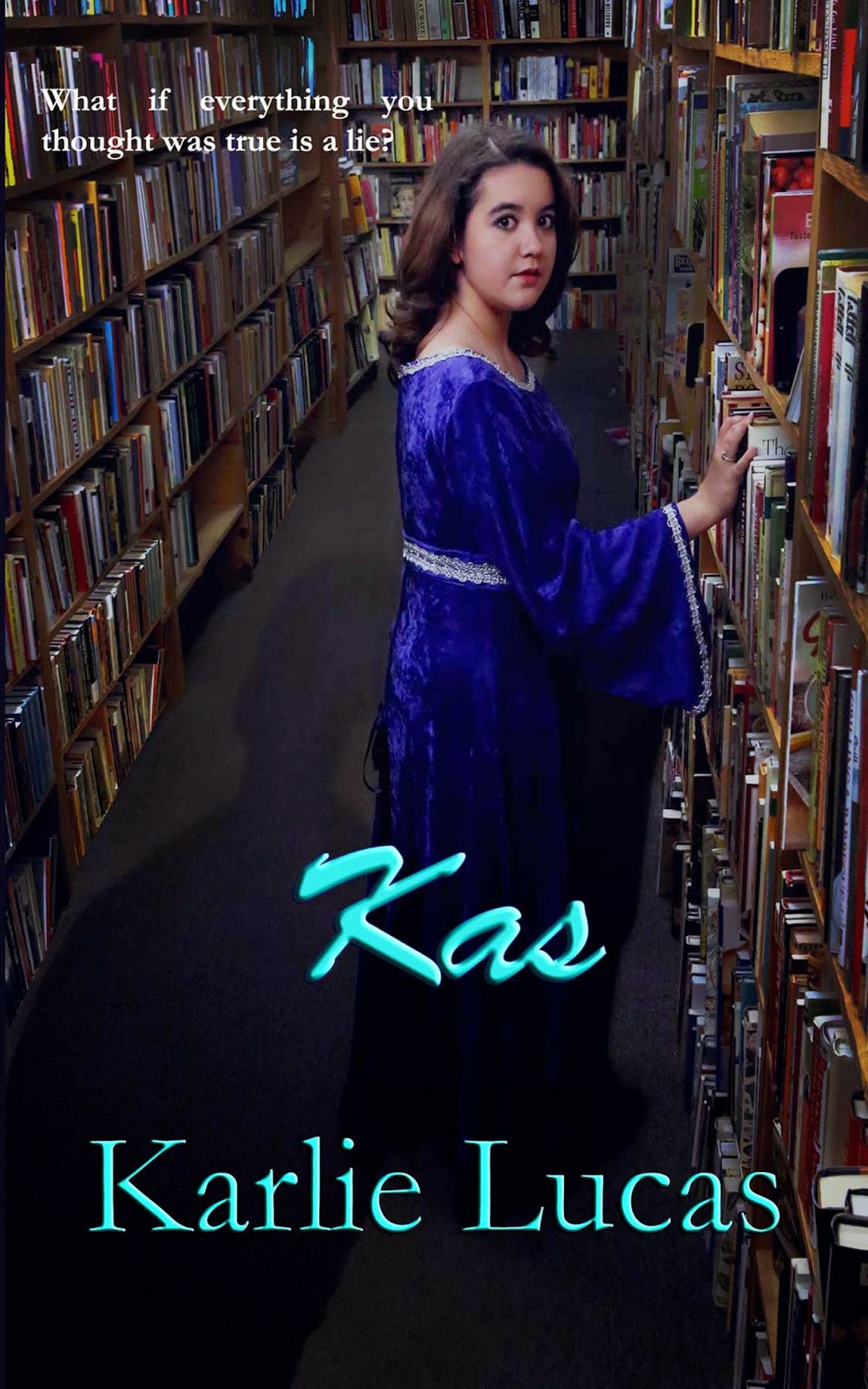 And don't forget that you can still enter to win one of five signed copies on Goodreads!

Giveaway ends April 27, 2015.
See the giveaway details at Goodreads.
Enter to win
Posted by Karlie Lucas at 6:00 PM No comments:

A Bit About Kas: Character Introductions: Other characters

Ron was a psychiatrist. She was in marketing. She advertised his office and he kept her sane, supposedly. I’m not sure how it all worked out but at least they got along. Personally, I didn’t see the thrill of psychology. I flunked every class I took.

Ron definitely didn’t get points for his looks, either. I couldn’t call him handsome; no matter how hard I tried. For Sara’s sake. Oh, he didn’t look ugly, but he wasn’t a drop dead gorgeous guy either. He had sandy colored hair, hazel eyes, and stood about six feet tall. He looked good when he stood by Sara. She looked a lot like him.

A rather straight-laced individual, Ron believes in what he can see, prove, and the theories he's learned from college. If it doesn't fit into his understanding, it doesn't exist. As such, anyone who exhibits behavior he has learned (or considers) normal, is obviously crazy. Guess where Kas falls.

He's also not much of a family man, considering that kind of thing beneath him. (I'd have a hard time picturing him as a dad.) His religious is science and theory.

Jenny is the first person Kas meets when she wakes up in the Waymeet (a.ka. alternate dimension). Kas describes her as:

"a rather young woman, dressed in some old-fashioned maid costume of green and white...."

Jenny is a bit stiff and formal when we first meet her, but is eager to please. She's also a bit motherly, and nonsensical. She comes to see Kas as not only a charge to take care of, but as a friend. And Kas eventually finds her as a friend too.

Jenny is also a bit of a worry wort. She has the habit of wrinkling her skirts or apron by clinging to them and ruffling the fabric. She also wrings her hands a lot. This seems to lessen the more the two get to know each other. Jenny is a bit of a timid character as well. She doesn't really care for horses, and adheres to some of the more basic old beliefs and traditions of wherever she came from.

Last but not least, I introduce to you Kas' mother. She's a bit integral in getting things going, so I'd be remiss if I didn't give her a share of introductions. A bit on the fussy side, she has a tendency towards the impractical while trying to be practical.

Mom was busy stirring up muffin mix she’d made from scratch. Blueberry muffins. Mom was always like that. She insisted that stuff from a box would eventually kill you.

More on the matriarch end of the spectrum, Kas' mother has no problem taking charge. She's also, most likely, the disciplinarian of the family. And as much as Kas has her difficulties with her, she sometimes envies her.

Mom took her customary seat near the head of the table, Dad sitting opposite her. They exchanged a wink and a knowing smile. They were probably playing footsy under the table.


She also has an exceptional memory, calling Kas out in the first chapter about trying to avoid going to the mountains, something her Voice told her to do. But Mom's no stranger to her children trying to get out of things. She's perfected the art of the guilt trip.

Posted by Karlie Lucas at 7:23 AM No comments:

Hey all! Update and countdown!

If you have a chance, you should check out this awesome interview by Fiona Mcvie. She decided to interview me this go around.

Also, are you ready for the official launch of my book? One week left until the launch party!

And don't forget to enter the giveaway on Goodreads!

Giveaway ends April 27, 2015.
See the giveaway details at Goodreads.
Enter to Win
Posted by Karlie Lucas at 6:14 PM No comments:

What story would be complete without a villain of some sort? That is why I thought you might like to get a glimpse of the "bad guy", as it were.


“What do you know of Kishan?” Milord’s voice was intent, almost watchful.

I tried to think. “He’s… He’s a hooded man who steals souls.” Somewhere deep inside, I knew there was more to this but didn’t dare look beyond what I’d said.

“Yes,” Milord confirmed. “But some might say he destroys them. He is a dark wizard with many talents, none of them good. It is unfortunate that you have caught his attention.”

As the passage above says, Kishan is a rather bad dude. Not much is actually known about this character, from an inside perspective. (I'll let you make your own decisions about him when you read about him.)

He is most often seen wearing a dark colored cloak, has several followers, deals in dark arts, and is not someone you want to mess with. Kas comes across him on several occasions throughout the story. None of those encounters end well.

If I had to picture him, I would go between a cross of a ring wraith and a dementor, but with a very dark brown cloak, instead of black. Maybe something like a demented, hooded monk?

I suppose the main question is "why is a dark wizard interested in Kas?"

Posted by Karlie Lucas at 1:00 AM No comments: