Here's a little bit of a question.

For those of you out there who don't know, I"m not just an author and a preschool teacher. I'm also a voice actor, director, producer, script editor, and sound mixer. Yep. I'm a woman of many hats. My voice acting is all on the "non professional" side, as we're doing everything fan based, but I did want to pose a suggestion. A little idea.

What do you think of possibly having a smallish book about... voice acting. Would anyone be interested?

You see, my hubby and I were brainstorming last night and thought, hey, why not make a small series of "how to" books. One of those major ideas was for me to turn my "getting into voice acting" panel (which I present at anime conventions), and turning it into a "how to" manual of sorts.

Now, I've been mulling over the idea. And part of me is very keen on this. Then the more "responsible" side of me puts in her two cents' worth with, "Aren't you already doing too many projects?"

You see, I"m one of those crazy people who likes to basically take on more than any sane person probably should. Like I said about, I'm a writer, a preschool teacher, and pretty much every hat on the voice acting side you can have in a non-professional capacity. I don't get paid to voice act or direct.

Then, of course, I'm working on promotional items for my newest book, Tarragon: Key Keeper. And there are some pretty cool items. I'm making molds, posters, bookmarks, key chains, magnets, t-shirts, bags, maybe plushies... I was going to do some prop replicas but my hubby talked me out of it. For now....

Then, of course there's the whole voice acting thing. Casting characters. Sending out lines. Paring down lines and sending feedback. Coaching actors. Master mixing the various voices together into a cohesive whole, adding in sound effects (sometimes making my own), and putting it up on YouTube for the world to enjoy. Luckily, I don't have to do the music, but I do my own editing on the scripts, and formatting.

But hey, I'm crazy like that. I like to keep busy. I wouldn't mind it if my day job was my writing job but meh... And, eventually, I want to add the "mom" had into all of this. Am I crazy? Probably. Will it be worth it? In my eyes, definitely. Even if I end up falling on my fanny, I"d still see it all as success.

But back to the question, should I start creating a "how to" series? The first would be about voice acting. What do you think?
Posted by Karlie Lucas at 5:53 PM No comments:

Since today is Dragon Appreciation Day (Yes, it's a thing), I wanted to share with you some of the things you could win when you participate with the cover reveal for Tarragon: Key Keeper.

I mean, it's nice to know what you might be getting, right? Of course, these items will also be available as prizes for future contests, including a drawing during the blog tour (happening in April), and as prizes at the launch party online.

So, without further ado, I give you some of the potential prizes. 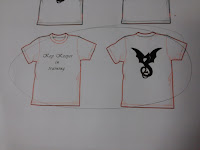 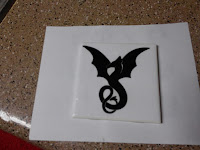 
And a set of four dragon logo coasters.

I'd show you the other ones, but they kind of give you too much of an advanced idea of what the cover looks like. Only a few weeks left for that. Though, if you want to get a peek a bit sooner, you could sign up for my newsletter. ;-)

What else do I plan on having ready for the blog tour and launch party? Well, I'm thinking pendant necklaces, bookmarks, key chains, canvas totes, and posters. It's also possible that there will be plushies, wall scrolls, and a leather journal with the dragon emblem on it. Those ones are up in the air, as it were, pending on how long it takes me to get everything else ready, but it gives you an idea of what I've got up my sleeve.

Did I mention that Key Keeper will also have an exclusive sneak peek to book two, Dragon Mage? Yes, this is a series. I'm editing book two now. I can't wait for everything to be done!

So, please pass this along. Share, share, share! And keep your eyes peeled for contests outside of the blog tour, cover reveal, and launch party. Because I do like to give away stuff. Who knows? Maybe you'll be a lucky winner. (Oh, and if you sign up for the newsletter before the 23rd, you have the opportunity to participate in the first contest.) 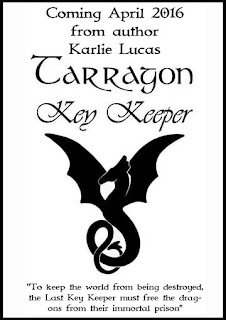 Posted by Karlie Lucas at 4:43 PM No comments:

Hello all. It's hard to believe it's already been over a week into the new year, but here we are.

I feel like I should have a whole lot more to say than, "hey, how's it going?", but that's what happens when one gets sleep deprived.

It's been a rather eventful year so far. Between my day job and balancing editing and getting things ready for my cover reveal coming up next month, things have been a bit hectic. That, and stress have not allowed the most restful of nights. Even now, I feel like I'm running on steam. But, like the Energizer Bunny, I just keep going and going... until I can't anymore.

I have been working, as I said, on getting things ready for my cover reveal. This includes producing several items that will be used in a giveaway associated with the event. I'm working on making a great many things. Little images, like the one below, are included.

So, what am I doing, then? Making coasters and jewelry, t-shirts and bags. I even tried my hand and making stencils. That didn't end too well, but maybe I'm getting the knack. I think I prefer using an Exacto Knife over a stencil cutter. I might not have the steadiest of hands, but it works for me.

Not all of those are for the cover reveal, though. Some of them are for the Blog tour coming up, and the Launch Party. No link for the Blog Tour yet, but it will come, and I'll share it with you at that time.

Also, a reminder, if you haven't signed up for my newsletter yet, it might be a good time to do so. I"m just about to start a contest, but it's only open to subscribers of my newsletter, so do sign up, upper right hand corner of my website.

Posted by Karlie Lucas at 7:29 PM No comments:

Huzzah! We made it into a new year! Congratulations, everyone! We did it!

Now that we've in a new year, I'd like to do a bit of reminding of upcoming events.

Coming February 8th, the official cover reveal for Tarragon: Key Keeper. Blogs from all over the world will be sharing the new cover! And, if you hurry, you can help! Sign up form is on the event page.

There will also be a blog tour, and I"ll let you know where to find the main event page for that as time gets closer.

Also coming up, the official Launch Party! This event happens April 22, on Facebook. Click the link to read the event page. Trust me, the prizes will be worth it. (I'm working on making them amazing! Especially the grand prize!) So invite your friends, or anyone else you think might be interested! The more people going, the bigger the prizes will be! (We're not just talking key chains and bookmarks here.)

There will also be fun surprises, sneak peeks, and contests for those who sign up for my newsletter. The form is located at the upper right hand corner of this blog. So don't miss your chance to get advance info about my new books! (Tarragon is a series, after all.)

Posted by Karlie Lucas at 6:10 AM No comments: