A Big Thank you

I'd like to offer a big thank you to all who have helped launch my newest book, Tarragon: Dragon Mage!


The winner of our last contest is Ashley Martinez, who has won a mystery prize. Ashley, please contact me for your prize.

And now I'd like to offer you the opportunity to win a signed copy of the book. Better hurry, though. The giveaway ends on May 1st!

Giveaway ends May 01, 2017.
See the giveaway details at Goodreads.
Enter Giveaway
Posted by Karlie Lucas at 8:01 AM No comments:

Looks like no one knew who to suggest for our last two introductions. Well, that's okay. Here are last but decidedly not least. Let's learn a little more about our heroine.

Anwen Porter is the only child and daughter of James and Margo Porter. Descending from a long line of Key Keepers, she feels it her duty to fulfill her father's dying request to return to the Mountains of her ancestry. But there is a lot more to her than even she realizes, especially after her experiences with Tyler and Courtney in the Mountain of Tarragon.

Appearance: Anwen is of average build, standing about five foot four inches, (5'3.5", technically, but she likes to count that half inch as a whole) and doesn't consider herself very athletic. More of an introvert, she always felt more at home in a library than on any sports team.  Her auburn hair sets off hazel-green eyes and a clear complexion. She likes to wear comfortable but stylish clothes, though nothing too trendy. She likes to make her own style. And she always carries around the dragon pendant her father left her (aka the Key to Tarragon), wearing it on a chain around her neck, close to her heart.

Personality: Anwen is an introvert and tends to avoid confrontation when she can, though she is no stranger to hardship. Growing up, she was often teased by her peers, occasionally being bullied. She also witnessed her father's death, something that shook her to the core. In general, though, she is gentle, reserved, studious, and kind. She has a natural-born curiosity but is humble and trusting, perhaps too much at times. She also tends to downplay her own importance, often putting her needs and wants aside for those of others, even at high cost to herself. Some would call her masochistic because of this, but she hates to make people worry and tends to at least pretend a confident, self-assured nature where nothing phases her. She tends to internalize her emotions instead of letting them out, which gets her into trouble.

A Brief History: Anwen's family migrated from the city of North Hope to Pallose when she was a young child. There, she attended public school. When she was around eleven year's old, her father was murdered. Since then, she has devoted her life to filling his dying request, to one day return to the Mountains of her ancestry. With little else to go one than a journal of a great grandmother, she journeyed to the Village of Lindwyrm and met Tyler, who revealed her true heritage as a Key Keeper. Unfortunately, she managed to draw the attention of the Mage Circle, with one member in particular doing her best to kill her. But death doesn't come easy to those under dragon protection.


Let's see who you'd pick for our leading lady. Enter for a chance to win a mystery prize. 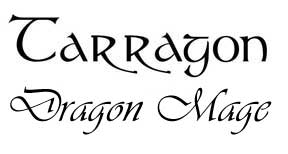 
Congrats to Ashley Martinez for her suggestions for Walter and Margo!

Ashley suggested Shemar Moore for Walter and Kate Winslet for Margo. I could see that for both characters.

Ashley, make sure you contact me with the information necessary to send your prize, a paperback copy Tarragon: Key Keeper!

Now for this week's characters. While Courtney and Tyler are old friends by now, I wanted to share a bit more about them this go around.

Tyler Durand is a hermit of sorts. At the apparent age of 17, he lives on his own, with no parents to speak of. He takes on the odd job in the Village of Lindwyrm, helping out those in need, and acting as a local guide to various historical attractions. At least he did until he met Anwen and decided to help her with her quest to figure out her family history. Turns out he's actually a dragon trying to save the rest of his people with only the help of an age-old prophecy.

Appearance:
In mortal form, Tyler stands about five foot seven, with light brown hair and dazzling blue eyes (the color of Lake Wyvern), and is fit and athletic. Solid yet decidedly not overweight, Tyler prefers to wear casual and somewhat rugged wear. Perhaps this is due to his constant hiking and working with his hands. He is very expressive, and almost every single girl in the Village wishes he was hers.
In dragon form, he resembles the majestic Western-style dragons, with silver-blue scales and a decidedly ridged back.

Brief History: Tyler belongs to the dragons of Tarragon, the only living dragon outside the sealed Mountain. He has lived several mortal life-times outside the mountain in search of the Key Keeper who will open the Mountain and restore the dragons to their rightful domain. Upon finding Anwen, he learns she's the Keeper he's been waiting for. With the help of Courtney, he takes Anwen on a crazy adventure to open the Mountain and free the dragons, revealing that he is the last dragon outside.

Courtney Willis was a rather flamboyant and self-centered teen of seventeen. A native to the Village of Lindwyrm, she considered herself an expert in the area, and loved to chase the boys, especially tourists. At least it was until she met Anwen. That's when she realized just how self-absorbed and shallow she really was. Since then, she's discovered there's more to who she is than she'd originally thought. Not only is she a dragon mage, but is now a champion for the last Key Keeper.

Physical Appearance: Courtney has blond hair of a medium length, and muddy-hazel eyes. She prefers to wear trendy clothes, the better to catch unsuspecting boys' hearts. Considered a bit of a beauty in the Village, she has a high concept of herself and her looks. Living in a mountain village, she is very fit, with good stamina and endurance.

Personality: Courtney starts out rather shallow. She grew up with a sense of privilege that has gone to her head. Tending towards pettiness, she hates competition and will often turn up her nose at anything she deems beneath her. She also can't understand why Tyler won't just succumb to her good looks and charms. She is easily jealous, especially when it comes to Tyler. Deep down, she's very insecure and unsure of herself. When she's not pretending to be something she's not, she's often off on her own, wishing things were different. All she really wants is to be accepted for who she is, but is afraid of showing that more sensitive and dependable side to her peers. However, once she meets Anwen, she discovers she has a greater sense of purpose in life and develops a sense of loyalty towards her new friends.

Brief History: Born of local parents, Courtney has spent her entire life in Lindwyrm Village. As a member of the elite, she gained a rather skewed vision of her importance in society. Wishing to be trained by the upper echelons of her class, she later changed her mind due to her mother's influence. When Anwen comes to the Village, she is quickly thrown into the mix, learning taht there is more to life than she originally realized. She decides to join the quest to wake the dragons and gives her loyalty to Anwen and Tyler.


Who would you pick to play these characters? Comment for your chance to win a an ebook copy of both Key Keeper and Dragon Mage!

Posted by Karlie Lucas at 1:55 PM No comments: