The summer is heating up, here's a contest

The summer is heating up here in Texas, and let me tell you, it's HOT! Even with all the rain we've had lately. That being said, anyone interested in a bit of a game?

I will give away a paper back copy of either The Unknown Elf, or Kas, to the best created "Pin" that has anything to do with any of my books.

The Pins can include quotes, potential imagery, pictures of you or something with the cover art of my book(s), or you holding a copy of my book(s). It can be funny or dramatic, or whatever, so long as you keep it PG.

When you've got it done, just send me a jpeg of it, or share the Pin with me on Pinterest and I'll post them here for some voting.  Deadline is the end of July, so get creating!

If you need examples, check out these: 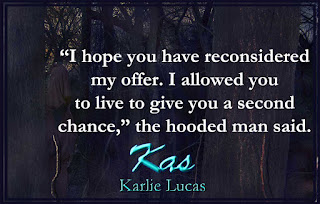 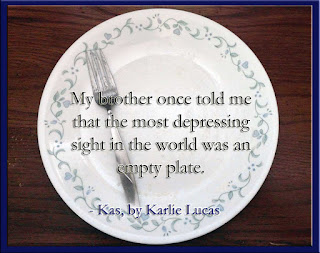 Posted by Karlie Lucas at 4:28 PM No comments:

Hey all. As some of you may know, I have published a few books now (two to be exact, and one short story). And since I'm still new in the whole world of publishing, I am in need of ways to get my works out there more.

With this in mind, I would like to open up this offer. I am willing to give you (Yes, give you, as in FREE) a digital copy of one of my two books, Kas, or The Unknown Elf, to read, with the understanding that you will post up a review on all the usual sites, such as Amazon.com, Barnes and Noble, Goodreads, etc. I want honest reviews.

I'll even let you decide which book you want to review. If you want to participate in this event, please shoot me an email (you can find it on my contact page). This will also enter you for my newsletter, which will only be sent out when I have something really worth sharing that I want to send out to my readers first.

Here's the blurb for Kas:

While in the mountains, Kas accidentally stumbles on a gateway to another dimension. Almost immediately, her life is in peril. From a disembodied man known only as Milord and a hoard of hooded men who want her soul, she doesn’t know who to trust in this strange place where dreams become reality. As Kas learns more about who she is and how she came to the Waymeet of Worlds, it becomes clear that someone is lying to her. But is it the voice she’s known her whole life or the new friends she finds in Milord’s castle. Choosing the wrong people to trust could cost her soul and prevent her from fulfilling her destiny.


And the blurb for The Unknown Elf:


Posted by Karlie Lucas at 6:57 PM No comments:

This weekend marks the second anniversary of my marriage to my amazing husband, Daniel. It's kind of crazy to think that it's been that long already.

It also marks the first anniversary of my grandfather's death, the one I grew up with. So, it's a bittersweet time for me. I'd like to take a look back at my time with him.

Perhaps, some day, down the road, I will be able to write about my grandpa. I would love to be able to do so. He had a very fascinating life, including service time during World War II, training fighter pilots. He always joked about how Texas was such a flat place. (He had to travel through it on his way to training.) Especially after I moved out there from Utah. (Still living in Texas, by the by.)

Grandpa was a great man. I'm told that his singing voice was opera quality, if he'd wanted to train it. But, instead, he chose the profession of plumbing, and created his own company. Some of my uncles worked for him, and for a brief stint, so did my dad. He even helped with the plumbing on campus for Southern Utah University. And his work ethic was top notch.

Being a trainer for pilots, grandpa definitely had a thing for planes. I'd hoped to take him to the flight museum at one point, but I guess that's not going to happen. But he loved planes. He even made a plane out of stained glass. Stained glass was one of his many hobbies.

Grandpa was very artistic. He taught me a love for stained glass, and how to do the basics. His projects were both small and large in that medium. I remember one year for Christmas he made a stained glass ornament for each one of us grand kids, no small feat as there were a lot of us. And he would make a house out of glass for the married couples. For each grandchild that got married, he would make a clock out of stained glass. I was one of the few who did not get one, as he was pretty much at his end when I got married, and not able to do much of anything.

I think his best masterpiece was the grandfather clock that sat in his front room. Not sure if it's still there or not, but it was amazing. I admit that I'd hoped to get it at some point down the road. He had a whole little village of houses on the mantle as well. I don't know if they're still there or not as I haven't been back since I got married. I hope I can go back sometime this year.

Grandma is still alive, but not doing so well. I can't say as I really blame her. Grandpa was her light.

I just want to put this thought out there. Take time to spend with your family. You never know when you might lose someone. And it is better to have memories of them to look back on then to not have any at all.
Posted by Karlie Lucas at 7:04 PM No comments: