For those who have been paying attention, you should know that The Unknown Elf is now available for $.99 in ebook format through the month of December. 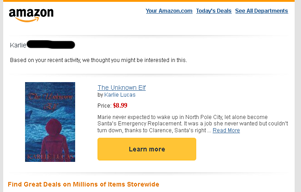 That's the first time I've had them recommend my own book to me. Guess it figures, in a way. But I still think it's cool.

I've had the last few days off from work. During that time, I've been working on what I hope is the final copy edit of book one of Tarragon, Key Keeper. It's been a pretty fun journey, going back through everything, making sure everything matches up.

So, speaking of editing and writing, there are a few things I've learned throughout my course as a writer.

I'm what they call a "panster" when it comes to writing. I write by inspiration (read "by the seat of my pants"). Usually the stories will come in chronological order. Lately, it's more like, here's a piece, there's a piece. I have to follow where the story leads me.

There are many schools of thought out there on writing, how you should do, what works best, the do's and don'ts. I think, in the minds of many, it gets confusing. I know that I've often gotten confused, drawn to one crowd of thought over another. And I've come down to one conclusion on that point: The camp of thought on what you should and should not do is, largely, based on genre. And, in the end, what really matters is what you want to do with the story.

I've been helping a friend with creative/content/developmental editing. We have our differing views on how things work or should be done. A lot of that comes down to which "camp" of writing advice we each choose to go with, and which we choose to ignore.

Like I said, as I've written, and read, a lot more, I've come to realize that it doesn't necessarily matter. Run on sentences? Yeah, those get tedious. So do a lot of short ones that don't vary a lot in length. That should be a given. But when it comes to using "said" versus other dialogue/action tags, I'm still with the "don't overuse said" camp. But I use it. And when I read it, most of the time for pleasure, I'm cool with the author's choice. When I'm trying to help other writers, well, I might go overboard. 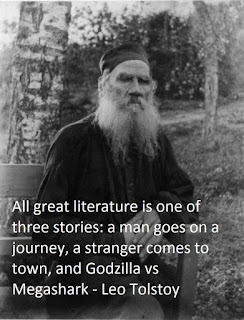 One of my best writing teachers ever (who wrote nothing by mystery), once told me that there are only two stories. The rest is just the filling. Someone comes and someone leaves.

When you think about it, it makes some kind of sense. Someone usually ends up going somewhere, either they arrive or they leave from where ever, be it in a physical, emotional, mental state. A journey of some sort usually takes place.

(Felt like I needed to share this image with you, after I found it today on my facebook timeline. I think it expresses, more or less, what my teacher taught me about the two stories told in society. I don't know that Tolstoy really said this, because of the whole Godzilla thing, but I still thought it worth sharing.)

Even though this teacher had no clue how to write fantasy (he admitted it), he gave me the best advice as a writer. He helped to mold and shape my idea of writing.

Now, I've learned things since then, obviously. I've learned how to, hopefully, be more effective as an editor. My mom used to edit my work and she did so with an iron pen. Lets of red ink found its way onto my pages. (She says she's learned to be more gentle after attending several writing conferences.) But she taught me the basics of what to look for. If it doesn't make sense to me as a reader/writer, it likely won't make sense to other readers.

I think the biggest thing I have learned is that it's okay to flesh out a story, but to not overdo it. Details are awesome. Allowing the reader to taste, touch, smell, see, and smell things in a scene is an amazing ability that not every writer has. I'm striving to get there. I know I'm far from perfect at it.

Details. But not too many details, are what helps make a story flow. The bare bones are a synopsis. But details, the muscle on the bones, that's what make a story interesting.